Facebook today officially announced a suite of new audio products — an indication that it’s taking the threat from Clubhouse and other audio platforms more seriously. The company is doing more than just building its own take on Clubhouse, however, it’s also announcing tools that allow podcast creators to share long-form audio, a new Spotify integration for music and a brand-new short-form experience called Soundbites.

The Clubhouse clone was probably the most-discussed of the new products ahead of today’s announcement, given the increased interest in the audio networking market.

Like Clubhouse, the Facebook experience will also involve live audio rooms, where users can engage in topical discussions.

“I think the areas where I’m most excited about it on Facebook are basically in the large number of communities and groups that exist. I think that you already have these communities that are organized around interests, and allowing people to come together and have rooms where they can talk is — I think it’d be a very useful thing,” said Zuckerberg, in a friendly interview with Platformer, timed alongside the official announcement. “When we launched video rooms earlier last year, groups and communities were one of the bigger areas where that took off. So, I think around audio, just given how much more accessible it is, that’ll be a pretty exciting area as well.” 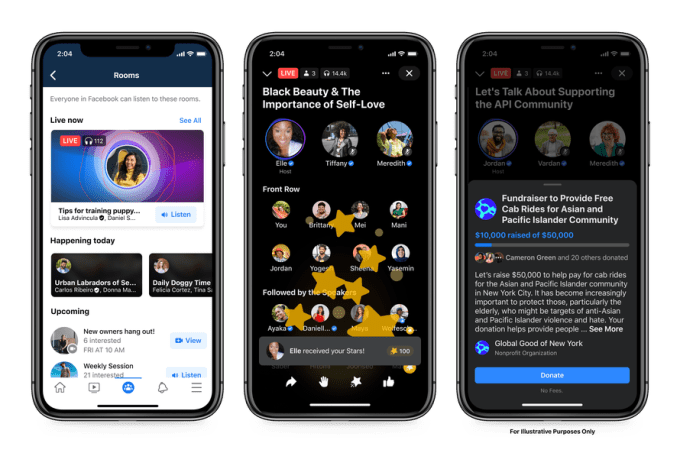